Sense of smelling in cats is highly developed. Cats have fourteen times more smelling power than human beings. Smelling power of dogs is greater as compared to cats. The cats have additional smelling organ known as jacobson's organ besides having nose. The jacobson's organ is located in the upper surface of a cat's mouth. A cat has a small wedge - shaped nose. The tip of nose is covered by a tough layer of skin called nose leather. The nose leather may be of various colors. It is usually moist and cool. A sick cat may have a warm, dry nose.

Cats are available in all rainbow colours and their shades. Cats are available in hundreds of colours. The common coat patterns in cats are solid, tabby, tortoiseshell, bi colour, tri colour and colourpoint. Eyes of cats are most beautiful as compared to all other animals. Eyes of cats are also found in all rainbow colours and their shades. A cat can have each eye of different colour. Each eye of a cat can have two or more colours. The eyes of kittens change color over a period of months to the final eye color. Eyes of cat are found in slanted, almond and oval shapes.

The eyes of cat shine at night because they have a layer of reflective cells at the back of each eye known as Tapetum Lucidium of yellowish colour which acts like a sort of bright mirror reflecting the light on the retina. Cats are able to see clearly in dim light. The night vision of cats is six times greater than human beings. Cats are not able to see in complete darkness. For function of vision, Cats have more nerve cells in their brain as compared to human beings and all other mammals. Cats also have about three times more rods in their eyes as compared to human beings so they can see better than human beings in dim light. Cats have Peripheral vision and binocular vision which enables it to accurately judge large distances. Eyes of cats have a additional third eyelid or nictitating membrane which is a thin fleshy membrane that is usually tucked away at the inner corner of the eye. The third eyelid helps in protection and cleaning of eye. The retina of the cat's eye is made extra sensitive to light by a layer of guanine, which causes the eye to shine at night in a strong light. Cats have highly developed sense of touch. The skin of cats is covered with highly sensitive touch spots which respond to the lightest pressure. The skin of cats shine due to sebum, a lubricant secreted by the sebaceous glands of skin. Ear of cats can rotate up to 180 degrees in order to locate and identify even the faintest of squeaks, peeps and rustling noises. Ears of cats have twelve muscles. Tiny erector muscles, attached to hair follicles, enable the cat to bristle all over. In relation to their body size, cats have largest eyes as compared to any other mammal including human beings. Domestic cats possess some colour vision. Domestic cats are able to see blue, green, yellow and gray colours. Cats sense of hearing is one of the highest in animal kingdom. Cats can hear ultrasonic waves. Hearing power of cats is about three times greater than human beings. Hearing power of cats is about two times greater than dogs. Cats can hear sounds of upto 65kHz and dogs can hear sounds of upto 30kHz. There are more than forty thousand nerve fibres present in the auditory nerve of cats as compared to human beings having about thirty thousand. Deafness is an inherited defect among some white cats, particularly those with blue or odd - color eyes. 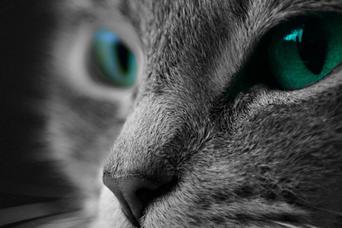 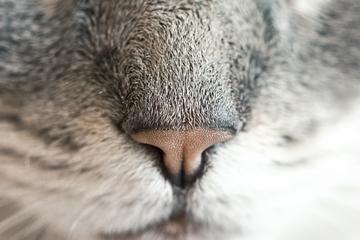